Trending
You are at:Home»Perth»CBD»Top Perth food spots through the eyes of a traveller

I’ve been in Western Australia for almost three months, and in that time I’ve been lucky enough to come across all sorts of delicious Perth food. These are my Top 5 Perth food highlights at the end of October, based purely on my dining experiences and what I’d recommend to other Perth visitors. This list will continue to expand as I munch my way round the city. 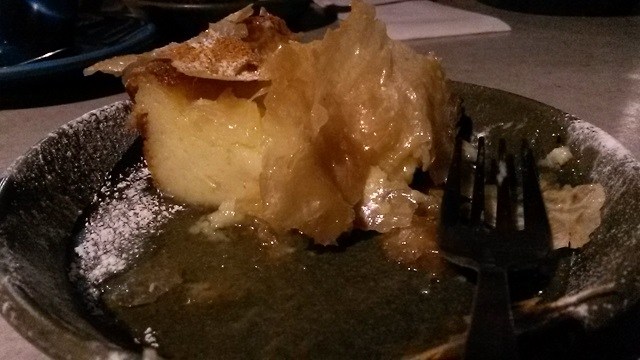 Apologies that the above picture is very much an action shot, but after the superbly named Galaktoboureko arrived for dessert, I was just too keen to test it out. “Semolina custard” may remind some people of gritty school dinners, but on this plate it was transformed into a subtle filling crowned with honey-glazed filo pastry. The different and delicious pudding maintained the high standard set throughout our meal; you’ll never go far wrong with spinach, leek and three-cheese pastries as a starter, but the mains were even better. Sausage and capsicums brought warm, comforting flavours, while slow-cooked lamb fell from the bone at the merest flick of a fork. Some terrific extra touches really underlined the quality: “whipped feta” was novel and excellent; beetroot yoghurt was as tasty as the meatballs it accompanied. Enjoying a feast in Brika’s laid-back al-fresco area feels like a mini-holiday, and I would highly recommend a visit. 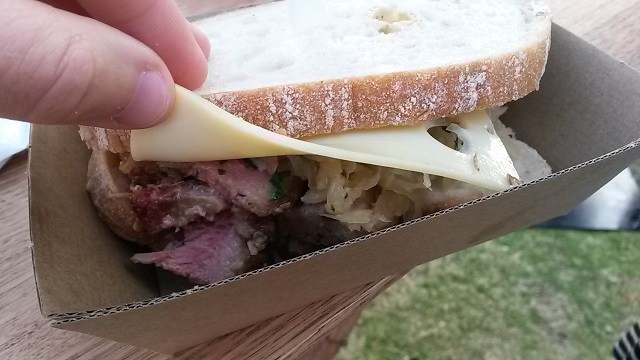 I’ve never visited Old Faithful Bar and BBQ, so I had no idea what the place itself is like. However, I have stumbled across their mobile collaboration with Clarence’s bar, which sees the two eateries team up at events under the name “Heads Will Rolls”. The sandwich? Old Faithful’s Reuben. The tastebuds? In heaven. Yes, I appreciate that I can’t endorse the rest of Old Faithful’s offerings, and also that this option is somewhat redundant for vegetarians. But friends, this creation is the swiftest route to happiness available between two pieces of bread. Served at the perfect temperature, thick cuts of rare beef party with melting cheese and zingy slaw. There was a dressing too – probably Thousand Island? – but I was so entranced by the sandwich symphony that I neglected to log each individual note. It’s available at the bar on a regular basis, and if it’s any indication of the rest of their food, I can faithfully suggest that a trip would be worthwhile. 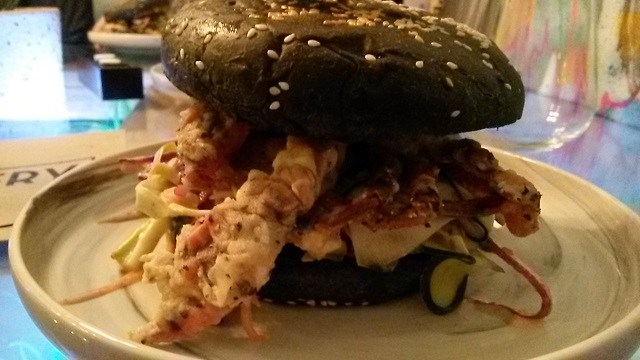 I’ve seen some people criticise the prices here, but the quality, quantity and BYO option meant I was more than happy to chip in the required amount. I mean look at that bun!!! I love a bao bun as much as the next man, but sometimes hunger levels call for the heavy artillery. This crab burger was stuffed full of taste and texture, and the “truffle chips” we ordered were truly premier potatoes. The spuds themselves were moreish and just crispy enough, but the truffle oil and cheese topping meant it was impossible to leave the table until both cones had been emptied. Speaking of the table, ours housed several live fish. Yup; if you sit in the back room of this compact restaurant, there’s a good-sized tank built into your dining area. Whatever your thoughts on the morality of goldfish gazing up as giants devour their distant cousins, it certainly makes for a striking centrepiece. 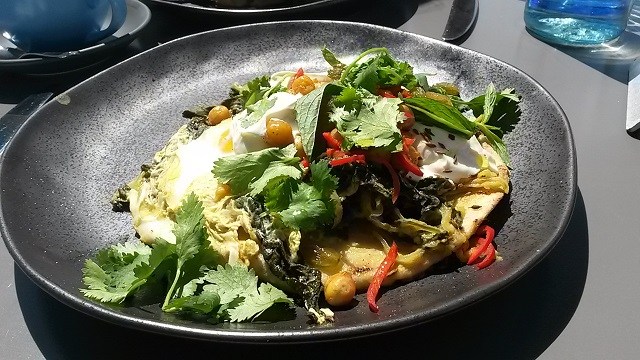 It’s easy to get blasé about brunch. Perth possesses so many good options for a late-morning feed that one could be forgiven for losing track of each configuration of avocado, eggs and sourdough. This means a dish has to be particularly strong to really make an impression, which is exactly what happened with the baked eggs at this smart coastal café. Each element was exactly what was required, and they were combined to perfection. The spinach was flawless, the chickpeas were crunchy, and there was just enough soft flatbread to mop the plate clean. Odyssea’s location – 50 yards from the beach – might make you assume that they wouldn’t try quite as hard with their food, but I’ll be happily heading back to see whether their dinner menu matches up. 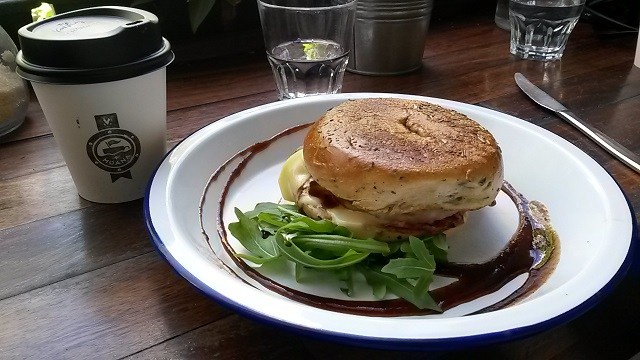 You’re in the centre of Perth. It’s hot. There are children yelling for ice cream, people thrusting flyers towards you, and your caffeine levels are perilously low. But though numerous nearby coffee stops would let you grab an express brew and hurry on, how many tick the “relaxing” box? Though it’s only a few stairs away from the hustle of Hay Street, this tranquil café is something of an oasis. A beautiful balcony looks onto sun-dappled leaves, the walls feature smart little murals, and friendly staff serve up quality coffee and various iced/creamy concoctions. There’s the usual array of sweet treats and toasties, but the weekly special we tried was particularly good: a generous stack of smoked ham, melted cheese, barbecue sauce and pineapple tucked into a soft, seasoned bagel. Moana is the ideal place to take a break.

Having moved to Perth from the UK, I’m getting to know the city by working my way through its cafes, bars and restaurants. I’m not sure if I have a favourite cuisine (all of them?) but I am enjoying Perth’s East-Asian options, along with the many opportunities for beer and ice cream.