Trending
You are at:Home»In the kitchen reviews»ThermoCook VS Thermomix – how they compare

After being sent the ThermoCook from Froothie to compare with my Thermomix TM31 (yes I was one of those unlucky ones who ordered just before the digital Thermomix TM5 launched in 2014), I can say it certainly is a good replica of the Thermomix. However, being cheaper there are some compromises to convenience and quality of the equipment.

I know not everyone is a fan of spending several hundreds or thousands of dollars on a kitchen appliance but if you are deciding on an all-in-one kitchen appliance then I hope this comparison of the ThermoCook with my Thermomix TM31 is helpful.

I decided I wanted a Thermomix two years ago just before having junior burger as I wanted to make her everything from scratch and my house wasn’t already filled with kitchen appliances. Before we started our little family, burger boy and I had spent more time eating out than cooking (check out my Perth restaurant reviews to see what I mean). This meant, I wasn’t that fast at kitchen prep, when I did cook I made a huge mess (still do) and my cakes NEVER turned out. The Thermomix prepped everything quicker than I ever could by hand, limited me to dirtying one appliance, enabled me to bulk cook for junior burger and even bake for us!

To test the ThermoCook, I’ve been using it for everything I normally use my Thermomix for and compared the cooking ability, equipment and ease of cleaning. Read on for my verdict or if you’re a skimmer like me, the first part of this post goes through what I was able to cook in the ThermoCook, then how the equipment and accessories compare including cleaning and the last part is whether I would recommend buying the ThermoCook.

How well does the ThermoCook prep and cook when compared to the Thermomix? 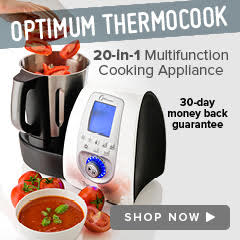 How does the ThermoCook equipment and accessories compared to the Thermomix?

This is where the saying “you get what you pay for comes in”. The ThermoCook retails at $1600 but currently has a limited offer where you can purchase it for $849 and the Thermomix TM5 (current digital model) retails at $2089.

The most notable differences are:

On the plus side, the ThermoCook is digital and comes with 15 auto programs which you can easily select by turning the knob to make a smoothie, quick soup, thick soup, chop, sauté, knead, steam, stew, warm, reheat, boil, yoghurt, rice and porridge. You are also able to add preset custom settings if you wish or manually update the settings to reflect your recipe.

It doesn’t however come with step-by-step digital recipes like the Thermomix TM5.

The recipe book is fairly basic but Froothie have advised that they are working on developing a new recipe book. However this isn’t an issue for me as any Thermomix recipe can be cooked in the ThermoCook.

The ThermoCook is worth the compromise if you rather spend less and don’t want to purchase a second hand non-digital Thermomix TM31 which would be closer in price. It is able to cook everything the Thermomix can but does take a bit more time to clean and you have to use a separate set of scales to weigh everything.

You can find out more or purchase the ThermoCook online from Froothie – it comes with a 30 day money back guarantee and 2 years warranty so you can give it a go before deciding to keep it. The ThermoCook is currently available for $849 (normally $1600) which is more than half the price of the current digital model of Thermomix. For another review of the ThermoCook, check out The Foodie Mum’s blog post The ThermoCook – a cook’s best friend.

Disclaimer: The ThermoCook was provided to foodie cravings to review and keep by Australian distributor Froothie. burger boy purchased the Thermomix TM31 two years ago for me as a “baby” present before junior burger was born. Prices are correct at time of publishing this blog 10/7/16. See foodie cravings disclosure policy for further details.