While I was eating through Europe, my brother Jason and his fiancé Little Miss Bacon explored the South West region of Western Australia thanks to Pullman Resort. If you’re a pitstop kind of traveller too…The Crooked Carrot is a must visit when driving to Dunsborough. Keep reading for Jason’s The Crooked Carrot cafe review.

A few weeks ago, Pullman Bunker Bay Resort launched their high tea in time for spring whale watching and offered foodie cravings a complimentary night stay to come and try it out. The timing was great as it just so happened to be mine and Little Miss Bacon‘s (my bacon eating half) 10.5 year anniversary. Yes we do look for any excuse to go out and celebrate 🙂 so we took the opportunity to road-trip down south and explore what Dunsborough had to offer.

No road-trip is complete without a pitstop along the way for some food and refreshments… 1.5hrs into our drive to Dunsborough, we finally gave into those highway food signs and ended up at The Crooked Carrot in Myalup.

On arrival, we were pleasantly surprised to have stumbled upon a gourmet café in the middle of nowhere. There were fresh produce, meat pies in the warmer, a cooked to order menu and gelato. We really hit the jackpot with all the possible roadhouse cafes we could of stopped at.

The groceries section was filled with homemade jams, marmalades and chutneys. We couldn’t believe how cheap and fresh the fruits were. I ended up buying the whole basket of lemons which were only $2.59/kg as well as chutney and some mangos.

We were absolutely drooling when we saw the warmer, the chips were handcut and skin-on. Hot chips are one of my most favourite things in the world so I had to get some. Little Miss Bacon chose the beef shepherds pie. 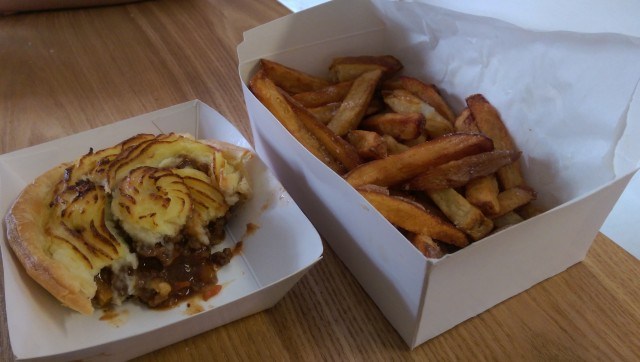 We were so excited that I forgot to take a picture before digging in. The box of chips were filled to the brim before I took the photo. They were as good as expected… they tasted like a hybrid between chips and potato skins. I was hoping the pie would be the usual brown meat gravy filling with a potato encrusted top, but The Crooked Carrot stayed true to the original and the filling was tomato based. I’m not a big fan of tomato based stewed meats as they remind me of the time I got sick from eating Bo Kho, a Vietnamese stew which our family enjoys.

I still did however thoroughly enjoyed The Crooked Carrot’s pie and would recommend it to anyone who loves shepherds pies. I found the piecrust had a flakier shortbread like texture that fell apart, an interesting contrast from the pies around Perth such as Golden Bakery which have a more firmer crust.

To finish off our meal, we had to have scoops of Double Handful gelato. 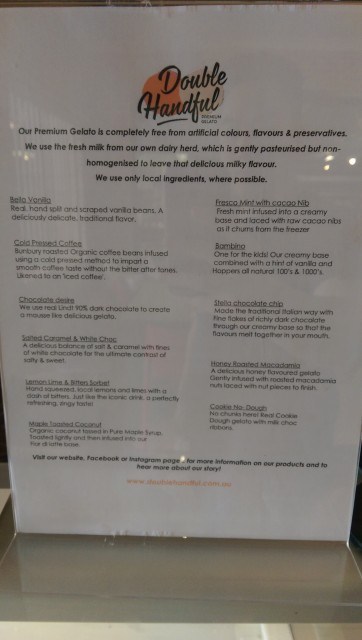 This was the first time I’ve heard of Double Handful and as you can see from the menu, it is a South West gelato company that specialises in premium gelato that is all natural, free from artificial colours, flavours and preservatives and also made with milk the way we should be having it… non-homogenised. If you haven’t tasted the difference with non-homogenised milk, give Sunnydale Dairy milk a try, it’s absolutely delicious especially with the chunks of natural cream that has formed throughout it, one would assume non-homogenised gelato would be just as epic. 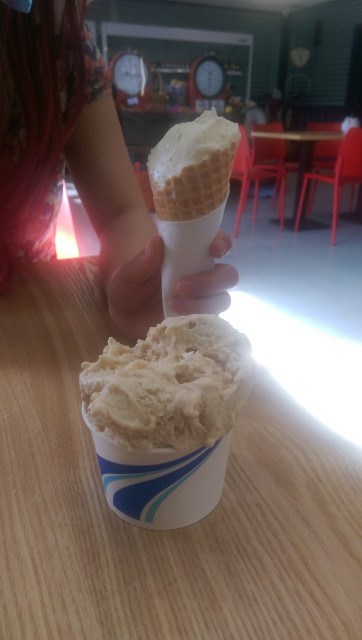 Little Miss Bacon got a single scoop of Maple Coconut in a cone while I got a double scoop in a cup, flavours I chose were Cold Pressed Coffee and Cookie Dough No Dough. The flavours were absolutely amazing… re-reading the Double Handful menu, I could taste every single element as described. Texture wise though, I prefer Gusto Gelato, but overall a very very solid gelato! I’m gonna check if there are any stockists in Perth after writing this post.

Stay tuned for Part 2 of this post – Arrival at Pullman Resort Bunker Bay and First Dinner in Dunsborough.