Trending
You are at:Home»Perth»CBD»Testing out Cupflick, a NEW Perth coffee app & Hopper Espresso

My brother Jason who is a bit of an IT geek and coffee connoisseur was excited to test and preview Cupflick, a NEW Perth coffee savings app before it launched this week. In his blog post below, he writes about his experience with using Cupflick as well as what he thought of Hopper Espresso, a new Perth coffee spot he discovered thanks to the new coffee app.

For those of you who buy coffee everyday, Cupflick are giving foodie cravings readers who download their app a free cup of coffee. To redeem your $5 credit just click on top up and put in foodie as the promo code when you download it for Android or iPhone. Cupflick are selective and hand picks each of their Perth coffee outlets, they’ve focussed on the Perth CBD / inner city and are working their way into the suburbs.

Read on for Cupflick’s story and a review of Hopper Espresso.

As an IT Professional, I’ve always been fascinated by Technology Startups and the mobile app development scene, it’s on my bucket list to one day create my own app, regardless of how much of a success or failure it is. So I was really excited to test out Cupflick, a new mobile coffee ordering and savings app. It was a match made in heaven of my two favourite things in the world… coffee and technology. On average, I drink about 2-3 cups a day, especially on work days. One in the morning to psych myself up for work, another around 10-11am to keep charging through till lunch time and then a final one between after lunch between 12-2pm to beat the afternoon slump.

I got in touch with the app’s founder Jonathan Lim to understand what motivated him to start Cupflick. So what was it? Through chatting with his mates in the coffee business, he found that sales for coffee shops have soften the past 2 years due to more competition and the overall slow down of the WA economy. So he decided to create Cupflick, a Perth coffee ordering app to increase exposure and drive foot traffic to a number of independent coffee shops around Perth with a quality brew. The best thing about the app is you get between 4-18% discount per coffee and access to promotional deals available at each shop. So if you’re the type of person to collect coffee loyalty stamp cards this is definitely an app that would appeal to you.

I work in the Perth city and totally agree with Jon’s comments on the slowdown, with all the big resource companies downsizing, you can really see the number of people buzzing around the CBD dwindling and splurging is far less than it was a few years ago during the peak of the resource boom. People just aren’t as willing to spend the way they used to.

When I opened up the Cupflick coffee app, a number of coffee shops around Perth near my office came up such as Llama Espresso, Max & Sons (Michelle features these guys in her Top Eat Drink Perth Coffee post ), Louve, Hopper Espresso and Mo Espresso. Before you can get started you need to enter your credit/debit card details and top up a minimum of $20 into your account. 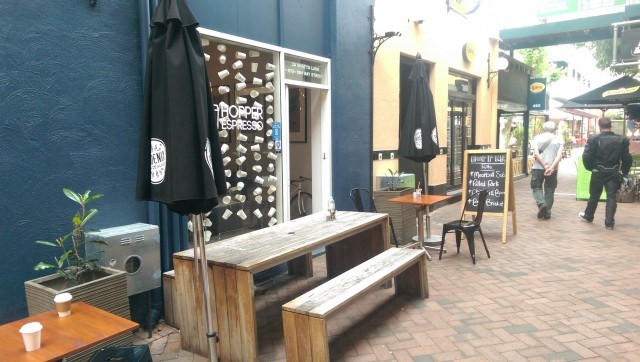 I decided to go to Hopper Espresso in Shafto Lane, a funky little cafe with cups hanging on the wall as it was the closest to my office. I’ve walked past Hopper Espresso on many occasions but never gave it a try. My usual haunts around the area are Lowdown (Michelle’s favourite – read Lowdown post here), Drip House, Carpe Coffee and La Veen. 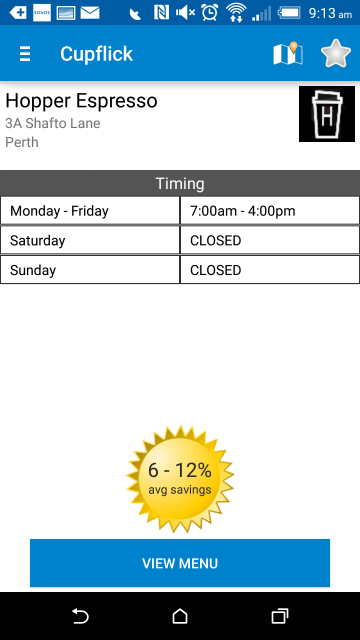 To order, I added a long black to the shopping cart and pressed the checkout button. I then handed over my phone to the Barista who enters in a confirmation code… as simple as that, payment was made and they started making my coffee 🙂

My coffee of choice for most of my life were Cappuccinos, but at one point I was fasting in the morning and had no choice but to drink Long Blacks. It was then that I realised I preferred it over a Cappuccino as the milk didn’t sit right for me. 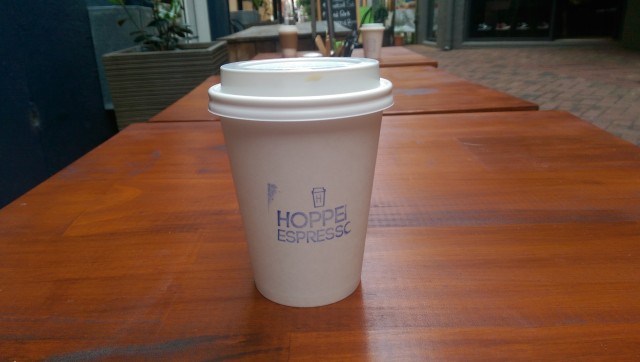 Now that it is getting warmer with Summer well and truly here in Perth, I prefer to order a Cold Brew if available, otherwise I normally just get a long black with ice. Hence my short lived excitement when I saw the Cold Brew Maker at Hopper Espresso as their cold brew wasn’t ready yet 🙁 The barista recommended I get their Chilled Batch Brew, a filtered coffee that is then refrigerated as an alternative, and after the first sip I would have to say it is now one of my favourite cold coffees in the Perth CBD!

The next day, I came back for one of the Cold Brews… the shining light in my dark little office cubicle 🙂 it was nice, but I think the taste of Chilled Batch Brew has already won me over. If you haven’t had Cold Brew coffee before, it is a 24-48hour process of making coffee by seeping cold water through grounded beans in an hour glass looking device. The coffee you get at the end tastes different from a hot brewed coffee and sometimes even has a chocolate flavour to it.

I thoroughly enjoyed testing Cupflick and really glad that I discovered a new favourite coffee place in the Perth city. Being of a Chinese background the savings aspect of Cupflick also appeals to me. Grabbing a bargain is something my parents ingrained into me, the amount of times my dad would come home with some expensive gadget just because the thrill of how much less it was then the original RRP was too good to refuse. So I calculated at my average 3 large coffees per day Mon-Fri, I would save $0.50 cents per cup and $7.50 a week, basically I’m getting two coffees for free a week.

I highly recommend downloading this Perth coffee app, the list of coffee shops available on Cupflick is growing everyday and with the next upgrade, you’ll even be able to pre-order your coffee. I can’t wait for the day I can pre-order a Chilled Batch Brew from Hopper and pick it up as I jump off the Red Cat Bus on the way to work.

I’m Michelle’s brother and also an IT geek that loves to eat. Together with my bacon loving partner in crime Perth food blogger Little Miss Bacon, we explore everywhere we are on the search for food that gives us that flavour explosion and hits the high notes.