Trending
You are at:Home»Events»A Gourmet Escape in Margaret River

burger boy and I was invited to experience Margaret River’s Gourmet Escape last weekend. Thank you Perth Convention Bureau for putting us up at the picturesque Pullman Resort in Bunker Bay and WA Tourism for providing us complimentary entry to the Gourmet Village held at Leeuwin Estate.

burger boy and I have been go go go the last couple of months so it was so exciting to have a weekend in the South West and a gourmet escape to look forward to.

The fourth room from the left was ours for the weekend… 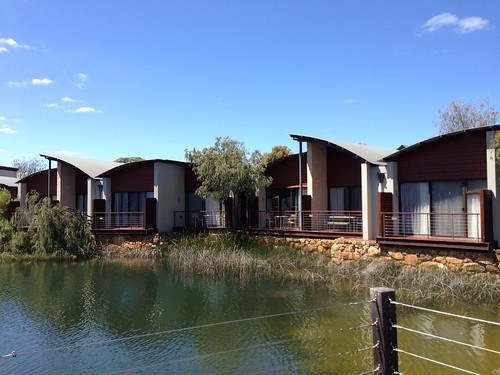 This was our lake view from our room (side note – it was beautiful and the ducks were gorgeous to look at during the day, little did I know they would quack all night from midnight ;)) …

It was a bit cold the Saturday night but as soon as it warmed up on the Sunday, we were pool-side…

So following on from dinner at Morries Anytime on the Saturday night and our brunch at Bunkers Beach Café on the Sunday, we headed to Leeuwin Estate Winery for the Gourmet Village which really gave burger boy and I a really good taste of the South West (literally).

Leeuwin Estate was beautiful, it was our first visit and we enjoyed the beautiful natural backdrop as we wandered through the Gourmet Village… 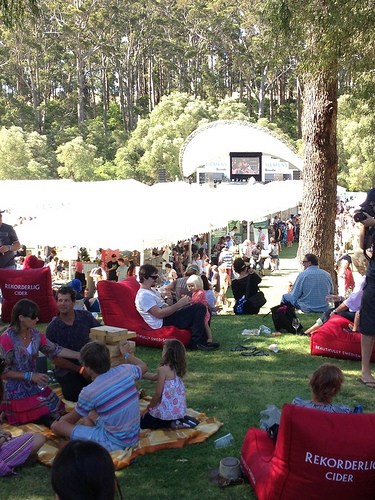 I was super keen to eat after a drive and swim at Bunker Bay, so I was on a mission to satisfy my foodie cravings.

We started off with Ole Paella Catering’s seafood paella using our first GEM, which was the official Gourmet Village currency (1 GEM could be purchased for $7). 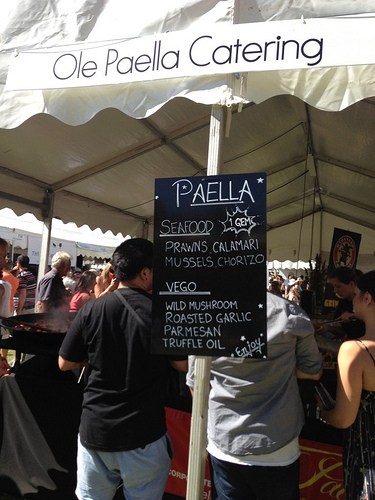 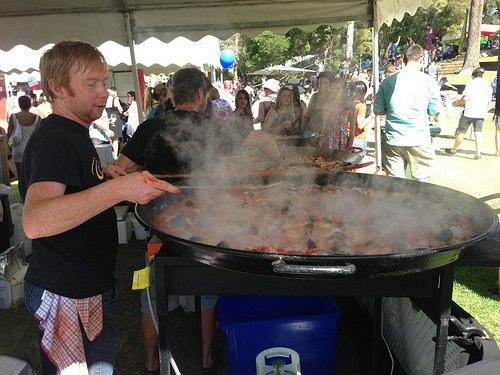 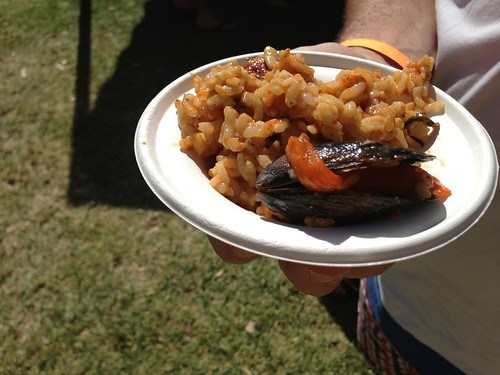 We then headed to the Cheeky Monkey Brewery stall, I had the Crooked Tale dry apple cider and burger boy had the Hagenbeck Belgian ipa.

With cider and beer in hand, we continued our gastronomy journey…

Along the way I met Josh, founder and chocolate maker of Bahen & Co, a new boutique chocolate producer in Margaret River. What’s different about Bahen & Co is that they make chocolate the traditional way by bringing chocolate making back to basics by using vintage equipment and just two ingredients, cacao and cane sugar.

This chocolate making process made me wonder whether I was able to eat Bahen & Co’s chocolate without my face breaking out (yep, despite everyone saying that chocolate doesn’t cause break-outs, it unfortunately does for me). I did take the risk at the Gourmet Village and had a small taste of Bahen & Co’s House Blend chocolate which is 70% cacao with slow roasted almonds and finished with hand harvested sea salt. My sample was too small to be able to indicate either way so I guess I’ll just have to try Bahen & Co’s chocolate again 😉

WA Tourism has put together vignettes that tell the story of the local producers in the South West. Josh’s story is featured below:

So after chatting about all things chocolate with Josh, burger boy and I kept moving through the Gourmet Village. 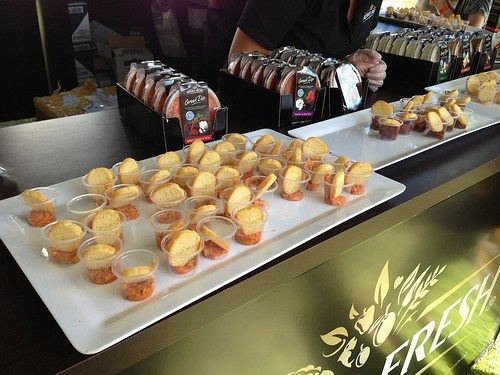 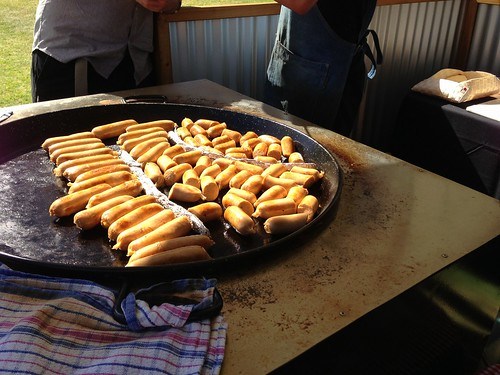 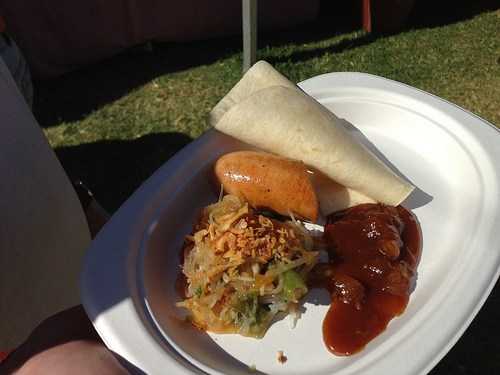 burger boy then had a seared beef fillet on wild rocket salad made from the St Margaret Vineyard & Grass Fed Beef food stall which he thought was tasty. I didn’t have any as it was only a small serving and I like my beef cooked through. 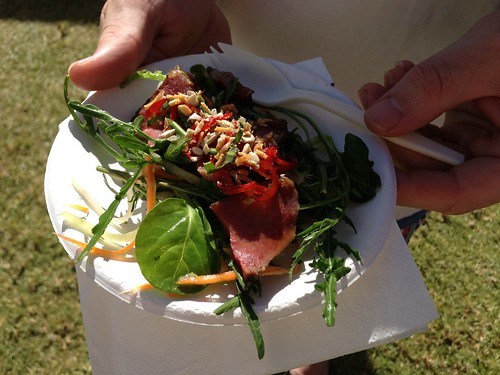 The apple cider jelly from Goanna Gallery & Bush Café was my favourite foodie find at the Gourmet Village, we got two of these with 1 GEM. 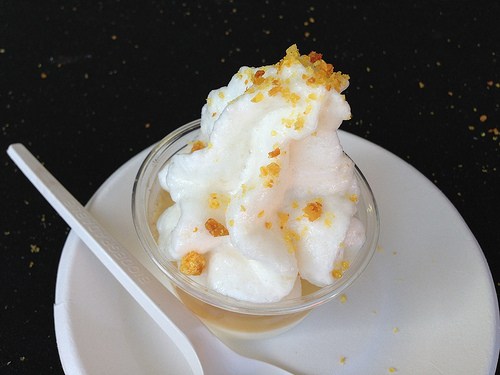 At first I thought the topping was cream and thought I better have it without cream but when I was told it was the best part and was the cider, I had to have it. The cider texture was just like whipped cream but fluffier. The jelly underneath had apple in it and as a whole this dessert was just delightful.

Last but not least to carry on the salted caramel eating trend as started at Morries Anytime, we had two salted caramel macarons on the way out of the Gourmet Village. 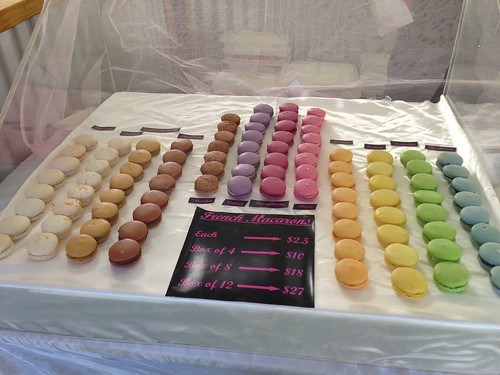 The sugar kept us going until we got back to our resort in Bunker Bay.

What I enjoyed most about the Gourmet Village, especially as burger boy and I only had a small window of time to experience the South West, was that we were able to have a really good taste of what the beautiful region has to offer all at the Leeuwin Estate.

On our last morning in the South West, I was determined to visit the Eagle Bay Brewery as I had heard the food was quality. We got to Eagle Bay Brewery right on 11am but their kitchen wasn’t open till 11:30am and burger boy had to head back to Perth by 2:30pm. 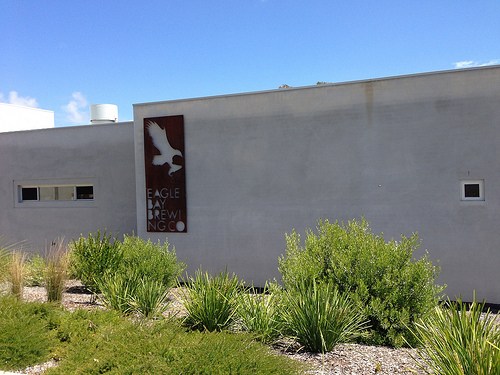 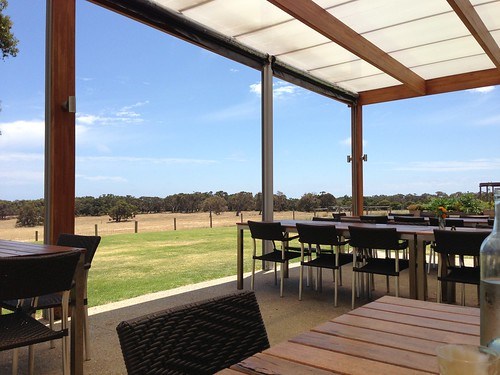 So as I enjoyed my latte with the beautiful view above, burger boy had a middy of the single batch saison… 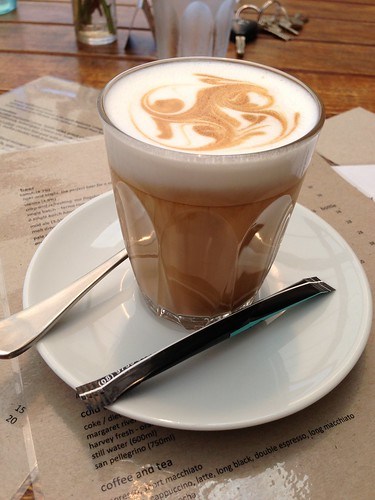 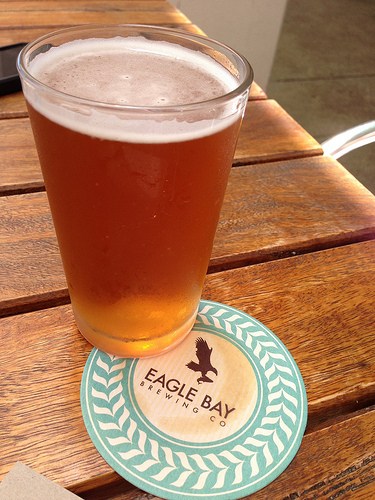 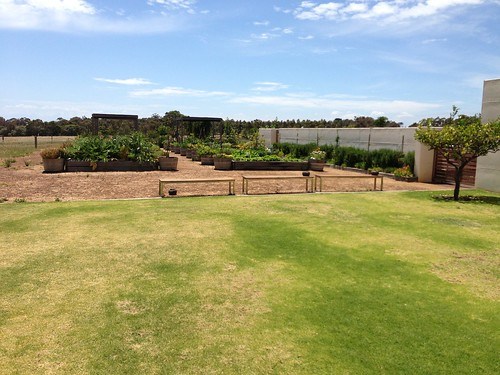 As we enjoyed our drinks, we had a chat to Andrew who told us that Eagle Bay Brewery had been open for two years. We talked about the Gourmet Escape and how great it was for the South West region. Andrew said that they sold out of their kegs by 3pm on the Saturday at the Gourmet Village and that they would definitely be getting involved again next year – good thing we went to the Gourmet Village on the Sunday 😉

It was also exciting to hear that the brewery will be bringing on a dry apple cider as soon as they run out of the saison beer that burger boy was having.

Eagle Bay’s story as told by brewer Nick d’Espeissis is featured in WA Tourism’s below vignette….

The Margaret River Gourmet Escape I thought was a wonderful way to showcase Western Australian food, wine and the local businesses behind them. The involvement of both local and global chefs at the Gourmet Escape I thought was really great in that it really helps put Western Australia on the map. The increase of fine food, wine and dining / entertainment options both in the southwest and Perth in general in the last year is really exciting. I wish I had more time to try and eat everything 😉 although maybe it’s not such a bad thing that I’m pacing our foodie experiences with Christmas coming up and more eating to be had.