Having been in WA a relatively short time, Victoria Park’s Dutch Trading Co. was one Perth food and drink destination I hadn’t yet managed to make it to. Accordingly, I can’t specifically say whether the bar’s revamped menu and freshly decorated premises are an improvement on what was in place before. But after my maiden voyage, I can say that they shouldn’t need to change anything for quite some time.

Walking in, the new look struck me as an understated triumph. Dark wood tables and a matching bar fit perfectly with a spectacular mural featuring a Dutch galleon. High ceilings give the room a chilled vibe, and an unobtrusive corner platform means Sunday sessions are sound-tracked by live music. 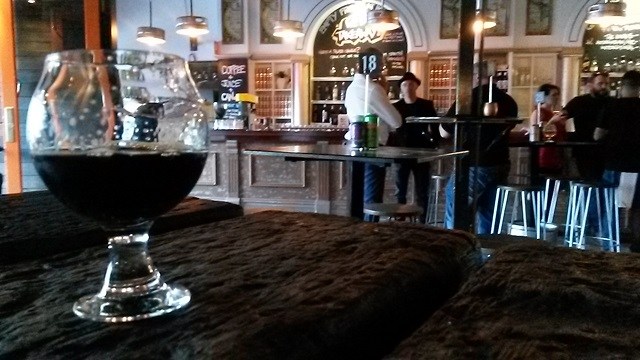 The recent improvements run to through the back, where another attractive room – available for bookings – opens onto an outside children’s play area. It’s not often you see a dedicated kids’ spot in a quality bar, and this example is more than a token effort. A sizable sandpit was strewn with toys, meaning parents can keep an eye on their offspring while also nursing a pint. I’d include a photo, but as we visited on an evening, the darkness and lack of little’uns gave the scene an unfortunate tinge of “nightmare haunted kids’ play park”. So I won’t.

The most impressive aspect of the decor was, of course, the beer list. A behemoth blackboard features some top chalk work, detailing all 18 of the draft brews Dutch Trading Co offers at any one time. We were told the choices are refreshed as soon as a keg runs out, and I’d be surprised if there wasn’t something on there to suit your preference.

Beneath the board, two fridges are stacked with another host of hoppy goodness, again showcasing domestic and importehttp://foodiecravings.com.au/wp-content/themes/juqrio5wp1bou10akkvzf124797/files/2016/11/d brands. there’s some big-time bottles in there, including the westvleteren 12, brewed by belgian monks and rated among the world’s best beers. one of those will set you back $55, but i think it’s cool to have the option of that sort of liquid luxury; it could be a cracker of a Christmas present. This was also the first bar I’ve been in that had an entire fridge dedicated to the increasingly popular sour style of beer.

To get an idea of the inventory, I tested a Dutch De Molen Imperial Stout and a Homestead cherry sour from WA. Both were remarkably good, and while Dutch Trading Co will definitely suit hopheads, I think it’ll also appeal to those who aren’t frequent beer drinkers. The staff we spoke to were uniformly friendly and knowledgeable, and spoke enthusiastically about helping customers find a drink they’d enjoy. The indecisive can also utilise what is apparently the Southern Hemisphere’s largest tasting paddle: a 36-hole leviathan that lets you and a mate sup a sample of everything that’s on tap. 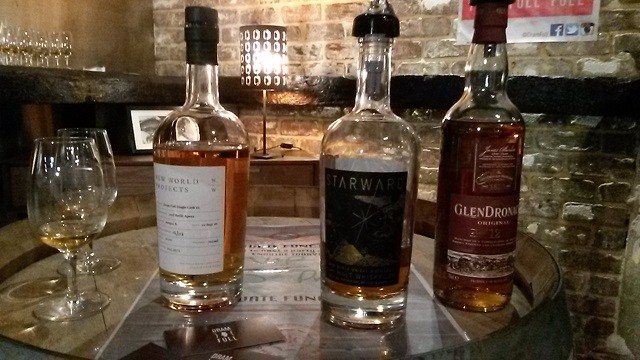 The options extend to a generous spirit selection, and because the Dutch Trading Co is also a bottle shop, all their beverages are available to take away. As well as the chance to fill a “growler” (large jug) with your ale of choice, you can ask for any of the tap beers to be poured into a can so you can enjoy them at home. An in-bar canning machine was another first in my book, and another indication of dedication to the craft.

After all that drink-related delight, I was really interested to find out about the fodder, having heard that the new menu reflects the DTC’s efforts to elevate their grub above simple “pub food”. For my money, they’ve done just that. 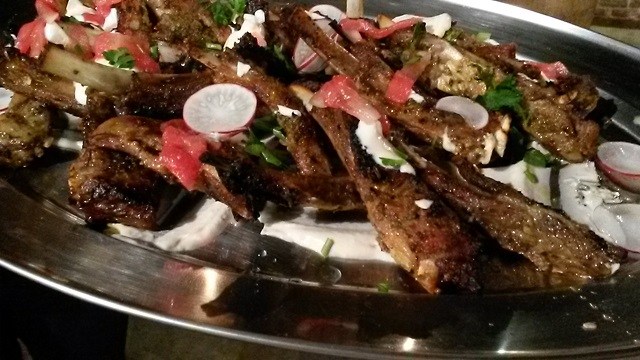 Lamb ribs with pickled watermelon and tahini dressing were delicious; meat falling away from the bone and all three flavours combining perfectly. The other sides we sampled also left me impressed, not least because they offered something different from the variations on dough, batter and potato that are often rolled out even in decent pubs. Instead, we got crispy chickpeas to nibble on, tender corn slicked with a warming berry and habanero salsa, and some lip-smacking pickles. All three dishes were tasty, fresh, and would’ve paired perfectly with a pint.

Dessert options can also be something of an afterthought in some pubs, but the chocolate-covered pretzels were delectably dark and sticky. Again, I got a sense the chef had thought about what would work with a beer, and I reckon these sweet and salty twists would sit perfectly with a stout or porter. Having glanced at the menu, I’m already keen to return and try out the deep-fried watermelon and coconut pie, served with rosewater double cream.

The Dutch Trading Co. has been flying recently; it was placed fifth on a list of the “Top 10 Metro Beer Venues in Australia” in September. On this evidence, that isn’t surprising. Don’t let stereotypes about beer geekery put you off. If the drinks, food and service are always this good, I doubt anyone will regret going Dutch.

Having moved to Perth from the UK, I’m getting to know the city by working my way through its cafes, bars and restaurants. I’m not sure if I have a favourite cuisine (all of them?) but I am enjoying Perth’s East-Asian options, along with the many opportunities for beer and ice cream.